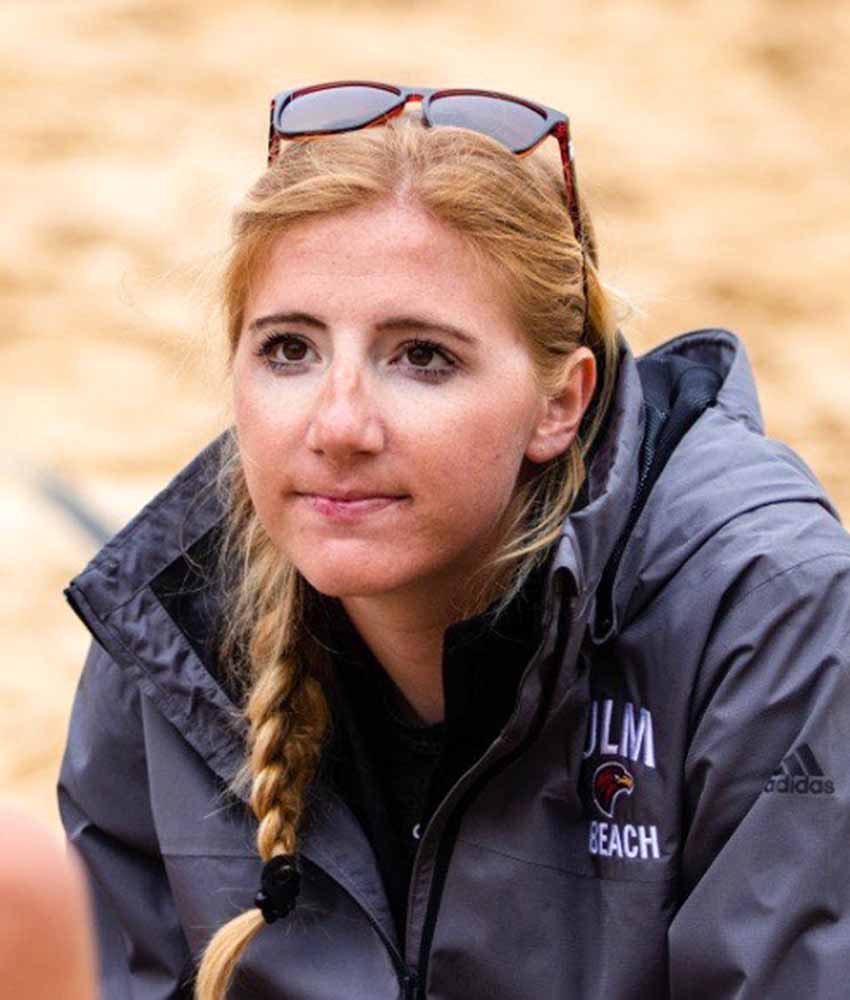 Sara Richell, currently a Varsity Assistant for Thompson High School Volleyball and practice facilitator for Birmingham Beach. Sara, a seven-year volleyball veteran, was named assistant coach to both indoor volleyball and beach volleyball at ULM in 2019.

Rishell went to ULM after a year with the Eckerd College Tritons, where she worked as a volunteer with the beach volleyball team.

Rishell, a native of Smithsburg, Maryland, was a volleyball standout at both American University and the University of Alabama-Birmingham.

She transferred to UAB for her junior season where, as a middle blocker, she was a two-time first-team all-conference selection. Rishell led the team in points as a junior and was the team-leader in blocks in both her junior and senior seasons, totaling 227 in her two seasons with the Blazers.

Rishell was also a member of UAB’s beach volleyball team in 2015 and 2016, winning 28 contests while playing mostly in the No. 1 and 2 draws.

Rishell excelled at multiple sports at Smithburg High School. In volleyball, she was two-time Herald Mail Player of the Year and earned all-state honors in 2010. She also set the school’s career records in basketball for rebounds and blocked shots and won a state championship in track and field while placing second in the triple jump.

Jodie joined Joe to help develop Birmingham Beach as an opportunity for Juniors in addition to assisting with running adult tournaments for the past few years. She comes with a strong background in coaching indoor for club for the past sixteen years for BVC ranging from Little Spikes to 18’s. She has completed her ten seasons coaching at Oak Mountain Middle School earning 8th grade Metro-South Coach of the Year in 2013 in addition to teaching 7th grade math. Prior to teaching and coaching at OMMS, she served as the assistant coach at Birmingham-Southern for a season after two seasons as the Graduate Assistant coach at the University of Montevallo where she also played as a Defensive Specialist/Libero from 2001 to 2004. She has also coached on the Bring It Promotions International Volleyball Juniors Summer Tours traveling from the South Pacific to Greece to South Africa to Western Europe. Jodie received a bachelor’s degree in mathematics from Montevallo in 2006 and a Masters of Education in May 2007. Outside of teaching and coaching, she loves to play indoor, sand, and grass volleyball as well as travel and spend time with family spread throughout the country. Joe and Jodie are excited to share their love of volleyball and family with their sons, JT and JJ.

Joe is one of the original founders of Birmingham Beach, and is now one of our practice facilitators. He has coached at the club and collegiate level. In 2017 he assisted Coach Ashley Hardee with UAB’s beach volleyball program. Joe has also coached club indoor for the past ten years in Birmingham for both Southern Performance and BVC. He is currently also teaching and coaching volleyball at Thompson High school under Coach Judy Green. Joe graduated from Samford University in 2007 followed by working at Sports Medicine and Fitness Institute training high school athletes in a gym setting focusing on strength, quickness, vertical, and agility. With this background, Joe helps bring Birmingham Beach to another level both physically and fundamentally. Joe also plays and runs adult tournaments in Birmingham bringing in talent from all around the South.

We have built in additional practices to help cover for rain outs! Cancellations for weather will be notified in GROUP ME.*